Been awhile since I did one of these, guess some explanation is needed.  Well, for starters, Formula 1's summer break isn't very accommodating to Americans.  F1 returned with a great one in while some of us were celebrating Labor Day.  And then some of us have jobs that got really busy...and Springsteen concerts to attend...and were lazy...well, we're back and better than ever.  Definitely not worse.  Now, to the fun part:

After the power packed twosome of Spa and , F1 had the usual calm procession under the lights in .  Lewis' gearbox issue took away the little excitement of Vettel's catching him up, which would have likely amounted to nothing on the track notorious for the difficulty of passing.

The biggest story after the race that came out in the subsequent week, Lewis Hamilton will be leaving McLaren for Mercedes, taking Michael Schumacher's seat.  Yes, shocking (more on that later in a separate piece).  Now pick your jaw up off the floor and lets get to the track breakdown. Suzuka, the figure eight test track situated next to an amusement park.  A classic, owned by Hoonda (maybe they should use it more to make fun cars...) is technical, fast, and flowing.  Tight with portions only a few car widths wide and very small runoff.  Perfection is difficult, and key, to winning at the track, which celebrates 50 years this year.

Ripping through the start finish the cars head to turn 1 and 2.  Drivers banzai through turn 1 in seventh gear, a brave move popularized by Schumacher as aero dominated the 90s, before slowing to third gear on the way to turn 2.

Next are the vaunted "S" curves, a left-right-left section that tests the engineers set up and driver consistency.  After turns 3 to 7 drivers go wide through Gyaku Bank Curve, uphill to the long left Dunlop curve where the cars head up the gears again.

7th gear comes right before turn 8, Degner Curve, and drops all the way to third for the Lesmo like right hander turn 9.  Sprinting to the hairpin the track narrows passing under itself, feinting right for the flat out turn 10, where drivers hammer down to second at Kobayashi corner (named after Kamui's brilliant overtakes in 2010).

Out of the hairpin, blasting up and right through turn 12 to one of the great turns at Suzuka, turn 13 and 14, Spoon.  Spoon is taken in fourth and the long turn wrenches the neck.  "Straight" to the historic left hander 130R, taken flat-out at over 180mph, drivers will hit almost 200mph depending on their bravery with the DRS in qualifying.  The scariest and deadliest corner still on the calendar 130R favors the bold, if you think Alonso's move on Webber at Eau Rouge was frightening, see real fear in the above clip.

Before turn 16 is the location of the DRS zone for 2012, different than shown in the map for 2011.  The 16, 17, 18 Casino Triangle complex flows out to the main straight, where a shortened DRS zone than 2011 and the start finish line await drivers before they go at it again.

Suzuka is one of the greatest circuits in the world, soaked in historic drives and moments.  The track is unique as it was born as a test track, much like the Nurburgring, and acts as the most complete test of racing driver and car.  The track is ferocious, demanding, and requires a delicate touch.  A driver favorite, the perfect win. 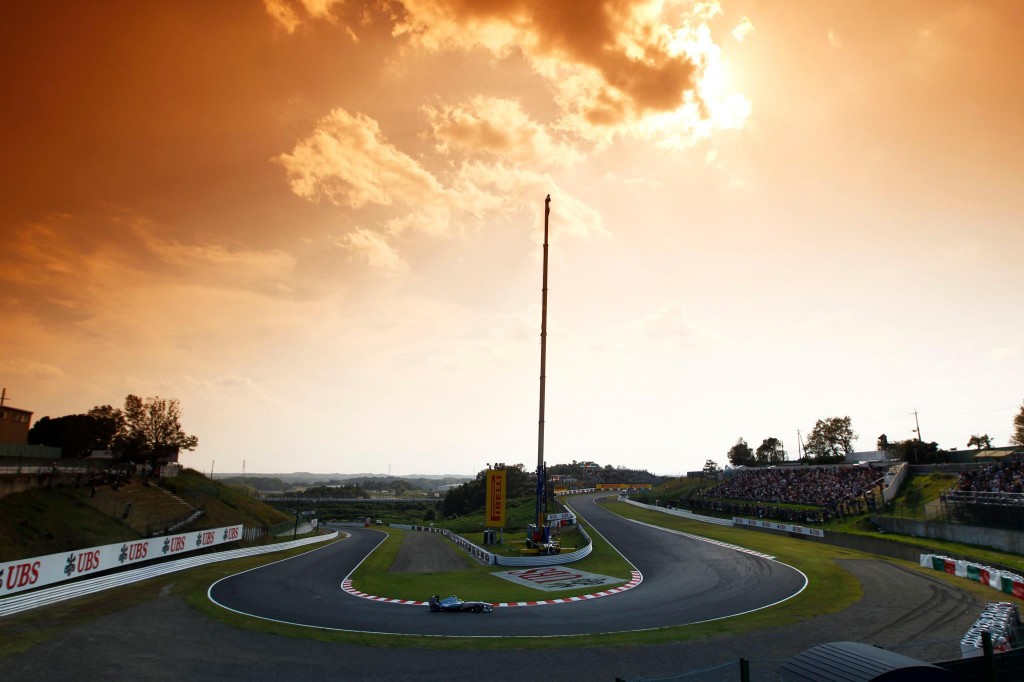 And in this season born in unpredictability, a trend has born, a red, prancing stallion of a trend.  Will Alonso take a further step toward a third championship, will the rest of the field take points off each other, or will one rise above the rest to take the fight to the Spaniard?

Practice will soon be underway, as well as my team by team breakdown and predictions.  Stay tuned for more on Suzuka, and the state of the silly season.
rd gear on the way to turn 2.