With the lap laid out it's time to breakdown the men that will be taking it on.  Red Bull enter with the constructors lead and Alonso with the drivers.  Suzuka being both high speed and technical with elevation change and a need for great aerodynamics is similar to Spa Francorchamps.  Like Spa, Suzuka is magnificent and has created some beautiful drives and unforgettable moments.  With the season winding down with the final six fly away races the updates will be smaller but the racing ever fiercer.  By current competitive constructor order:

Vettel is the closest to Alonso by points (29 back) while Mark has dropped since his early season consistency.  Although RBR come off a Vettel victory under the lights, the car is not well suited to Suzuka.  Comparing to their performance at Spa, it's going to be a weekend to get through and be done with for RBR.  The car has performed best at locations with low to medium speed corners.  Looking at the race pace from on, the finishes have been consistently lower than qualifying.  Exceptions being Britain, where Webber won thanks to wet qualifying and practices, and Spa, where a flying Frenchman destroyed most of the front runners.

The high speed nature of Suzuka and the Red Bulls known comparatively low top speed will not help this weekend.  Prediction: qualifying position between fourth and eighth, race finish between fifth and seventh.

Word on the grid is Lewis Hamilton and Jenson Button are in the fastest car (unless you ask them, they say Red Bull).  McLaren has shown excellent pace of late on virtually every circuit, from Spa to .  has out right one lap pace in the Macca but will also be leaving his team at the end of the year.  Buttons smooth style, and loyalty, along with his respect and admiration for and the Japanese people will give him an emotional edge.

Do not expect McLaren to do anything that would stab in the back, not with him still having a shot at the title.  But that doesn't mean his mechanics and engineers are going to be entirely pleased with his decision to leave them.  Prediction: qualifying should be poll and, at worst, second row.  Race finish, remember that majority of dry race winners have come from the front row, so a win is in the cards.  Buttons light touch aids his race pace; he gets the edge over , even if he starts behind him. 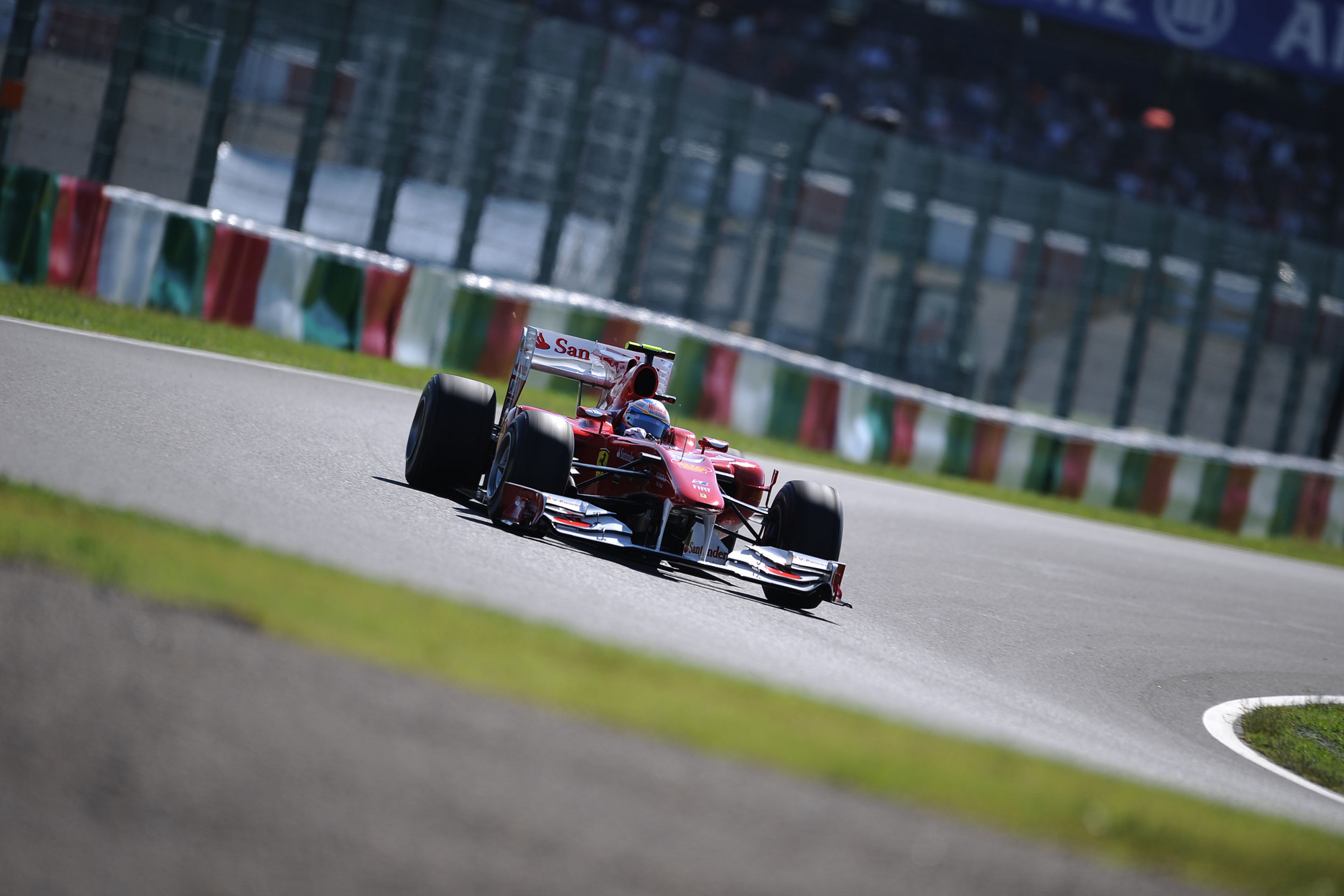 The F2012 may not have been the fastest car on the grid once this year but it's strategists have been wily, and Alonso, superb.  The Ferrari may not be the best at any one circuit, but it has been consistently within striking distance of those that are.  In Alonso's hands, more often than not, the red car is able to strike, hence the points lead Alonso has had since .  is a lost cause; not sure if he isn't up to speed to Alonso...or just was never that good to begin with.  He backed into a title fight in 2008, thanks to mistakes and penalties, and he was never a real match to Schumacher or Raikkonen.  Saddest of all for his comeback, has not come close to what Alonso can do.

Prediction: the might of Alonso and consistency of the Ferrari make it a strong case for an Alonso start in either fifth or sixth, and a start around twelfth.  Race finish, either third or fourth for Alonso and tenth or eleventh for .

Lotus moved by Mercedes in the Constructors a few races ago and continue progressing.  Without winning a race Kimi Raikkonen sits third in the Drivers Championship, 45 points adrift of Fernando.  Grossjeans has also put in a valiant effort in his first full season, though a timeout did mar it.

Like every race weekend, this one presents the best chance for Lotus to get a win.  Kimi has returned close to his original F1 form and presents Lotus' best option at victory.  Suzuka is so technical it rewards experience and Kimi's years, not to mention successes, at Suzuka put him head and shoulders over his teammate.  Prediction: Kimi on the front two rows, Grossjeans anywhere on the third and fourth rows.  Race finish, Kimi on the podium, Grossjeans just outside the top five. Snagging is a coup for Ross Brawn's well funded but underperforming Mercedes effort.  All eyes will be on the re-retiring Michael Schumacher, who has a 6 race farewell tour ahead of him.  Schumacher couldn't have picked a worse time to retire; by all appearances he's finally relearned the craft and has finished higher than his teammate when his car hasn't let him down or gotten into an accident.  Perhaps without the burden of having to outperform the car Michael will be able to...outperform the car.

Rosberg is consistent but Schumacher comes with six Suzuka victories to his name.  The team will probably be throwing some 2013 bits onto the cars in preparation of the British Diva's arrival next season so competitiveness could take a hit.  Prediction: fifth and sixth rows possible, Rosberg ahead of Michael.  Race finish, Schumacher between eighth and tenth, Rosberg between ninth and twelfth.

Sauber loses the spectacular Sergio Perez to McLaren.  It is a major loss, in both money and skill, which the team is not happy with.  Sauber wants to be a team that drivers gravitate to and want to drive for, not a team that drivers use as a stepping stone.  As much progress in that direction as was made this year the team are still not there yet, at least not when the likes of McLaren come calling.

Kamui has great single lap pace, is racing at home on a track he knows well, and has much experience at Suzuka (especially overtaking).  Perez comes in with all of his finesse and confidence that a waiting top drive can bring.  Prediction: Kamui put it on the front row at Spa, Perez snagged a fifth starting spot; don't see why similar positions aren't possible this weekend.  Race finish, a Koby win at home would be nice wouldn't it?  And a Perez podium would be neat too.

Rough season for Force has gotten less rough as of late.  They've clawed back a few points on Sauber but di Resta and Hulkenberg can't do much more with the machinery they have.  A disappointing season all around.

Prediction: Might squeeze into Q3 but more likely starting near the back of Q2.  Race finish, the usual high top speed should help them get closer to the points, but a points finish would be surprising.

A tale of two drivers.  Maldonado: fiery, fast, dangerous; can win but more often than not tosses the car into a wall.  Senna: consistent, calm, overlooked; misses out on Free Practice one to Bottas because Maldonado brings enough money in to avoid sharing, taking precious laps away from him on race weekends.  Senna has more consistent points finishes but Maldonado's victory will be the lasting image of this season.  With Bottas again replacing Senna for FP1 on a track where every lap is needed to get everything down Senna is at his usual disadvantage.

Prediction: Maldonado surprised with his third place grid position in Spa.  He could put it up between rows three and five, Senna won't be in the top ten.  Race finish, if Maldonado keeps it in one piece he could be right around P5, while Senna should be able to scrap up to tenth.

SO, finally, my picks are: Kamui Kobayashi victory, Kimi Raikkonen second, Sergio Perez third.  I also predict a McLaren pole, Kamui second on the grid, followed by Button and Kimi.  Realistic or just bullshit (long time since I did one of these; bullshit meter is high)?  We will find out in due time.