A last minute Thursday night obligation and a manic Friday kept me from completing a pre-qualifying write up, so here is a first ever, one of a kind, limited edition, post qualifying/pre-race write up.

A wild weekend of practice sessions and interesting updates, most notably the Lotus super DRS system found on Kimi Raikkonen's car, got kicked up a notch due to a wet third practice and dry/wet qualifying session. There were winners and losers throughout, and some truly dramatic moments that made the qualifying for the German Grand Prix a roller coaster of excitement. Here's how that brilliant session played out, how Narain Karthikeyan put in a time quick enough for pole position, and how this may effect raceday tomorrow (12pm est on FOX in the USA).

From the get go it was obvious that rain was looming so teams hit the track ready to put up whatever time was possible. As per the norm the bottom three teams of HRT, Marussia, and Caterham hit the track on the softer compound while the rest of the field tackled the track on hards. One of the most impressive reveals from the first session was the one lap pace of the McLaren boys on the hard tire. The team appears to have begun reeling the car back in and winning some pace compared to their rivals.

As the halfway mark came and passed the first session, McLaren pitted feeling both drivers were safe and it became clear that top drivers with times in the 1'16.4-1'16.9 range were in danger of getting knocked out by midfield teams on soft tires. Lewis Hamilton's top time on the hard tires was slaughtered by Kimi Raikkonen who dropped well into the 1'15's while also on hards. Meanwhile Micheal Schumacher found himself in the regulation zone and so came back with barely enough time to accomplish two laps, and unlike the other drivers clamoring to set a time took the track on hard tires. Schumacher not only had to beat his old hard tire best but had to contend with drivers on fresh soft rubber. Luckily, Schumacher has been on his game these past races and with the track rubbering in since the green start of qualy, was able to put down a spectacular lap right as time expired to move on. 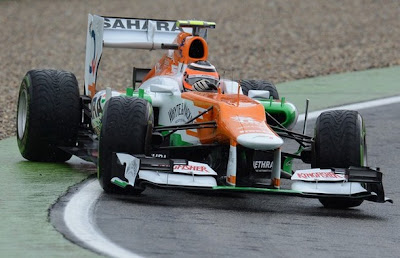 Right as Q1 ended rain struck Hockenheim hard and heavy. Within minutes of the start of Q2 the track was thoroughly saturated, all cars on intermediate wet tires. As the rain progressed the window to set a time on inters closed, and after a thrilling display of wet weather driving by all participants Ricciardo, Perez, Kobayashi, Massa, Groshean, Senna, and Rosberg were left out of Q3.

Even before the drivers took the track for the third and final part of qualifying there were calls for it to be delayed due to the downpour causing a track so wet the full wet tires were at their limit of effective range. The stewards dismissed these worries and started the session on time and the dangers of the track soon became clear, with aquaplaning through the fast Parabolika a major worry.

Hamilton started off strong, and eventually the rain stopped, though the track remained soaked with rivers of water running across certain areas. Halfway through some drivers switched over to fresh full wets, which paid off as Alonso claimed pole on his fresh set with a time of 1'40.621. Kimi Raikkonen had no such luck on either set of wet tires, remaining tenth and well off the pace of his competitors

Do note that with tomorrows race predicted to be dry the majority, if not all, of the cars completed qualifying with dry weather set ups, and Kimi's brilliant pace in Q1 shows that the Lotus is extremely quick over a single lap, and the rest of the grid will shuffle at the start. Like the British the starting top ten will be free to choose their tire since the grid was set in wet weather conditions.

Some quick thoughts before tomorrows running of the 2012 German Grand Prix as I am pressed for time (gotta watch The Dark Knight before getting to the theater early for Rises): 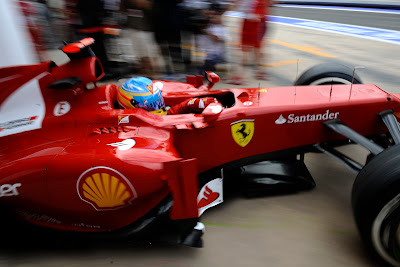 The modern Hockenheim is a short lap with tight technical turns. The Hockenheim of old had teams setting up with low downforce to maximize straight line speed leading to driver struggles and fan entertainment in the stadium section. With those tears through the forest long gone high downforce cars will find favor. Look for the Red Bulls to put up a strong showing do to their aero prowess. Alonso is always a safe bet, especially from the pole, and after Ferrari attempting to mix up their starting tire choice in Britain (they used hards while the closest rivals used softs) costing Fernando a victory a more traditional setup is most likely. Alonso showed again that both he and the F2012 are great in the rain so if the 20% chance of precipitation does come to fruition he will be on top of the world.

McLaren looked good in the dry with the new updates but not so good in the wet. If the race remains dry the duo will be able to start turning their seasons around; if the race gets wet, it does not look as promising. Mercedes have two hungry German drivers but with Nico starting so far back his race will be one for low points at best. Michael on the other hand starts third and has been showing more and more of his seven time side since Monaco. The questionable pace of the Mercedes at Hockenheim in the dry is the only question mark for the teams chances.

The Lotus in the hands of Kimi Raikkonen showed awesomely in Q1 but fell apart on full wets. The team have high hopes this weekend, as usual, and really feel they have a shot at a win, as usual. This weekend looks more like the start of the season with Kimi as the most likely Lotus driver to score their first win after Grossjean taking that standing the for a bit. Sauber do not look to hot, with poor qualifying pace in both the wet and dry. Perez starting so far back opens up his strategic options, and he is a wonder fighting through the field. Kobayashi needs a strong result as there are rumors that his “underperformance” this season could cost him his seat.

Williams are very happy to have Maldonado ahead of both McLarens and both the team and the Venezuelan want to prove they're here to stay and truly top of the field competitors. Force India have both cars in the top ten and need a strong result from each to put up a fight for the midfield championship. Hulkenberg starts a stellar fourth and as a German driver is chomping at the bit at putting in a solid result, while his teammate di Resta is just as hungry, especially since he is a former DTM Champion and would be overjoyed to see his former German conquests wash over into F1 this weekend.