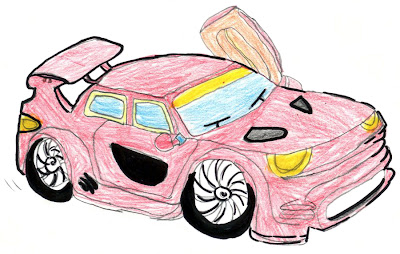 The exclusive image you see here, derived from minutes spent poring over our www.flickriver.com search results reveal the subtle stylings, and sharp curves of Ferrari's 599 GTO Succesor, The F620.  We're pretty sure that Maranello won't be happy when they see what's leaked about this new design. I mean look at that thing, it's Red - just like a ferrari. Has two doors, so you know it's a legitimate sports car and has a massive spoiler befitting a Formula 1 car; super car indeed. Check out those NACA ducts on the hood too, the power churning from this brand new V12 we're sure will be breathtakingly terrific.


Rumors of the shape and design of the 599 successor have been taking form online in recent weeks, Autoblog spotted a test mule last week and had this to say:

"The 599 successor – rumored to be dubbed F620 – will likely be powered by Ferrari's 6.3-liter V12, churning out over 700 horsepower. Unlike the all-wheel-drive FF, the 599 replacement will continue to use rear-wheel drive, sending its power to the back wheels via a dual-clutch transmission with an F1-style electronic differential." 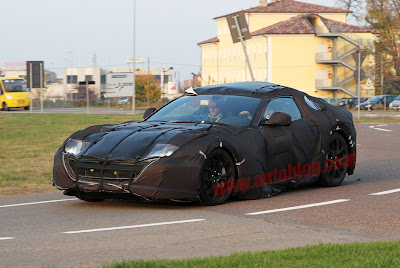 The similiarties between the test mule and our exclusive image can't be disputed. Four wheels? Check. Headlights? Check. An expertly designed windshield to maximize aerodynamic efficiency? Check. Our bombshell reporting takes the wraps off of the aforementioned NACA ducts and spoiler. Talk about a true spoiler alert!

Say what you will about Ferraris recent design direction with the 458 and the FF, but we're confident in this reveal that they might have created their greatest grand tourer yet. It's been an exhausting day in the Automotive world, after Ray Wert of Jalopnik broke the news of the new Corvette we decided it was time to reveal the new Ferrari. Ray's been taking some heat from some twitter users and we're sure some executives at General Motors. Take Zack Klapman for example:
"When will @RayWert stop using the auto world as his training to take over Harvey Levin's position as  head of TMZ douchalism?"


Oh snap! Comparing Ray Wert to Harvey Levin, the founder of the most successful celebrity news site on the internet is a pretty cruel claim. Who would want their site to the best at what they do? Surely not Ray or anyone else; mediocrity is much more rewarding. On top of that, we didn't know douchalism was even a word until we looked it up. It actually isn't a word! Damn, those are fighting non-words Zack. Here's the thing though, most major car magazines both online and in print have basically become the Public Relations branch of the auto industry - regurgitating press releases, hiding information until "the release date", and writing fluff pieces on how great certain cars are. Sure, some cars get panned- but overall, car magazines are in the business of selling more cars, because it sells advertisements. We are enthusiasts, we want the scoops, we want inside information, we don't care if it comes from a leak deep inside the bowels of General Motors or from a clumsy flickr account who posted this F620 picture that we found. We're happy that Jalopnik still has the enthusiast at heart when they find these leaks and publish them. Sure, Ray could have totally made up that he saw those two corvettes simply for page-views and ad revenue. But would someone from an online forum make something up to gain attention? Never.
Email ThisBlogThis!Share to TwitterShare to FacebookShare to Pinterest